Alaska pollock fishing:
It runs in the family

From afar, it looks like a stadium afloat on a dark abyss. The C/P Starbound trawls for pollock on Alaska's Bering Sea, her deck lit up so work can continue around the clock. From 8 p.m. through 8 a.m., this is Tylar Loewen’s domain.

Loewen, 29, is the night deck boss, and it’s his job to keep equipment and crew safe, even when tall waves crash against the bow and launch a wall of water high enough to hit the wheelhouse windows. Working in rough seas is hard, but if he ends the shift hauling in a net full of fish, it’s all worth it, he says. “We're happy; we're bringing in the money. That's the most exciting part."

For Loewen, and for many in this industry, fishing is a family affair. His dad is captain on a vessel not unlike this one. Loewen’s got his eye on the captain’s seat, too, and he’s earned his mate’s license to prove it. He plans to be around for decades to come, and he’s counting on the pollock sticking around, too.

He feels it’s a pretty safe bet - the U.S. Alaska pollock fishery is among the most well-managed in the world. 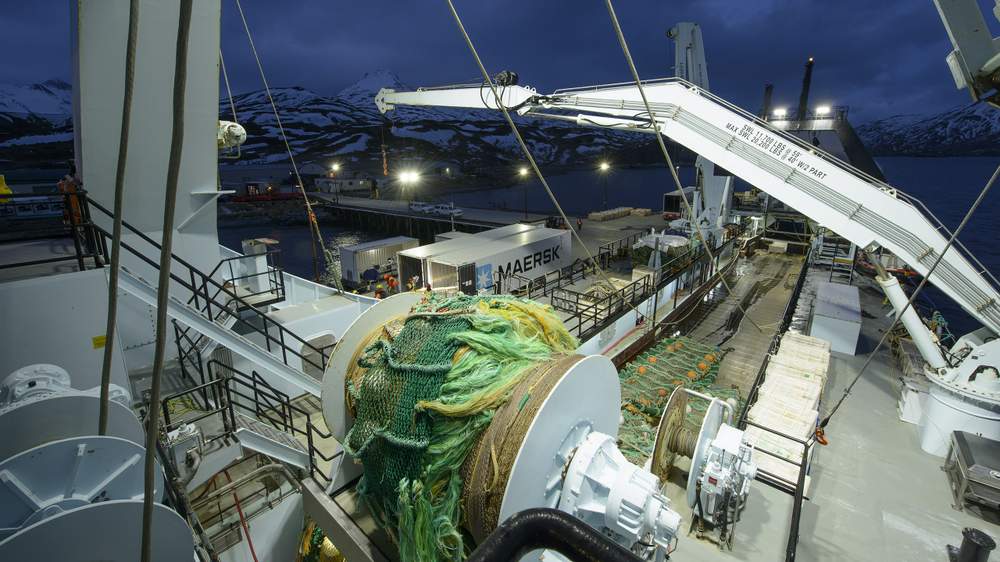 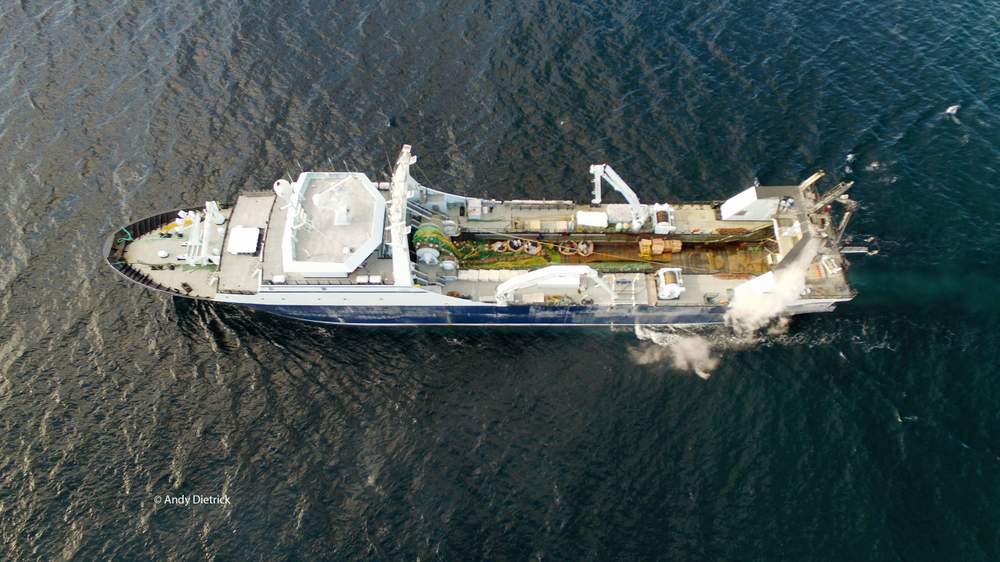 Alaska pollock from U.S. fisheries is certified sustainable by the Marine Stewardship Council. That means a team of independent scientists has found that the fishery has an effective management system in place, which ensures fishing stays within scientifically set limits and minimizes impacts on other species and the marine environment. The findings of the independent assessment team are subject to peer and public review, and only seafood from MSC certified fisheries can use the blue MSC label.

The U.S. Alaska pollock fishery was first certified sustainable by the MSC in 2005, and its sustainability scores are among the highest of any MSC certified fishery in the program.

A journey of innovation

Sustainability isn’t just about a stamp of approval, it’s about continually adapting to new environmental and market challenges so that the health of fish populations, and the livelihoods of fishing families like Loewen’s, are secured long into the future.

One of the most revolutionary changes to the sustainability of the U.S. Alaska pollock fishery was the introduction of a catch-share system in 1999. The new system divided up the fishery’s allowed annual catch between individuals, immediately removing competition between boats. Whereas boats had previously raced against one another, or fished in challenging conditions to catch fish before the annual limit was reached, they could now focus on catching their individual limit when conditions were good, and sell any unused quota.

The catch-share system not only prompted a steadier pace of fishing across the season, it allowed pollock processors to work more consistently, and to adapt to changes in consumer demand.

A measured pace of fishing and processing helps ensure the highest quality and efficiency, and allows processors to make more food out of the same amount of fish.

Now, each boat knows how much will be caught ahead of time. The game is in keeping costs low and getting as much as possible out of the fish. “Nobody's bragging about bringing on all these fish,” says Loewen. Instead, it’s about how much value can be extracted from the catch. 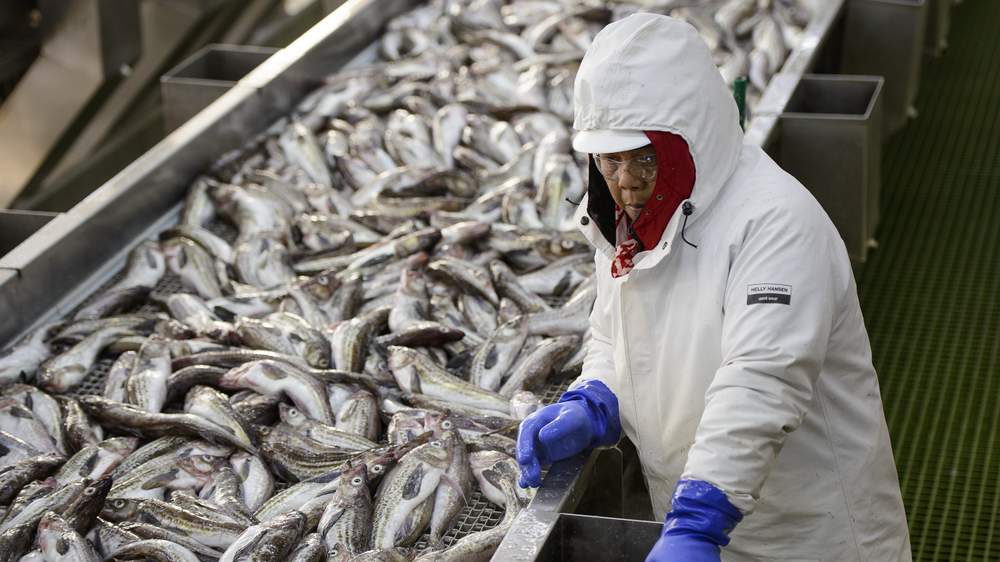 Catcher/processors like the Starbound process fish fresh out of the ocean. Within hours the pollock are filleted, frozen, and packaged with labels that indicate where and when it was caught. Meat that isn’t filleted becomes a minced fish product that is the base for surimi seafood, such as imitation crab and other seafood items. Roe, a delicacy in Asian markets, is separated and sorted by grades.

In 2014, the C/P Starbound underwent a major renovation. The boat was sliced right down the middle in order to weld in a new 60-foot section.

“The conversion allows us to utilize every bit of every fish we take from the ocean,” says Karl Bratvold, who captained the Starbound for 22 years before heading to dry land to manage the renovation project. “We were only making fillets, surimi and roe before. Now we can make more products, access more markets, and reduce waste.” 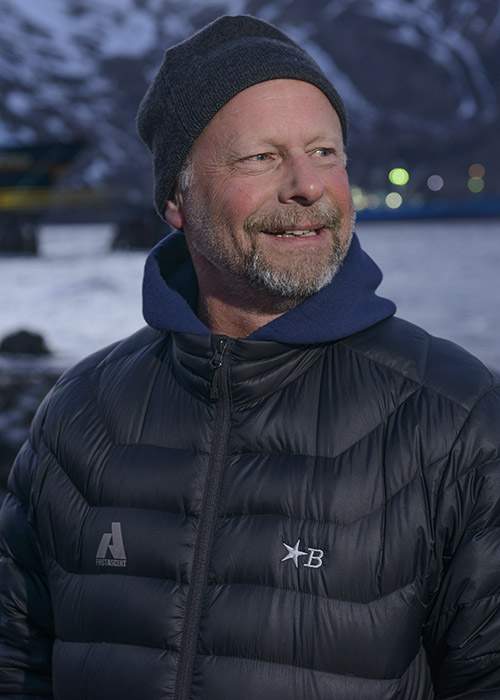 The ship now makes fish meal, which is used as an ingredient in feed for many types of aquaculture products. It also now produces fish oil for the food supplement market, although some is used on board as a renewable fuel source to power the boat’s boiler, reducing use of fossil fuel. 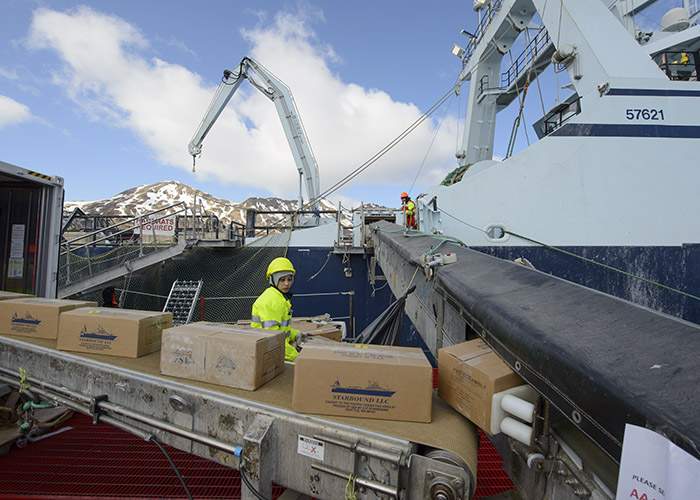 Frozen and packaged pollock is offloaded from the vessel

Karl Bratvold, captain of the C/P Starbound for 22 years and manager of her rebuild

At the helm today is Jeff Garrison, 46. Much like Loewen, he spent his childhood summers on fishing boats; his dad was captain of a 125-foot trawler/crabber out of Dutch Harbor, the hub of the U.S. Alaska pollock industry. "It was a beautiful little boat,” he says. “I grew up on it. We used to play on it. It was like our jungle gym."

There wasn’t much his dad could do to sway him away from a career in fishing, he says. “You see your dad and you think he's bulletproof because he goes out on the ocean. It's something that, as a young boy, you're like, 'Wow, I want to be just like that guy.'"

Dutch Harbor is still a fishing town at the end of the world, but the fishery itself has swapped the frontier feel of its heyday for the comforts of a professional, well-regulated, state-of-the-art industry. That suits the fishermen here just fine.

When consumers choose Alaska pollock products with the MSC label, they choose to support families like Garrison’s and Loewen’s, and they can feel confident that they are eating a fresh, sustainable product.

In North America and Europe, pollock fillets are used in popular breaded items, and are featured in products like the McDonald’s Filet-O-Fish and BirdsEye Omega 3 Fish Fingers. And unbreaded products and surimi seafood are becoming more popular. It’s the taste of the Bering Sea on a plate, to be enjoyed for generations to come.

Filet-O-Fish: Alaskan pollock on a plate